Recently, the failed European Super League project was a big subject on Twitter. Among millions of tweets posted on this topic, some voices are especially influential.

This article is a continuation of the analysis we published on the impact of Twitter in the abandonment of the Super League. Thus, the dataset used is the same: 2.6 million tweets posted by 876,000 unique users in 5 languages (🇫🇷 🇬🇧 🇪🇦 🇮🇹 🇩🇪 ). In the first analysis, we focused on content (sentiment analysis, semantic mappings…). Here, the objective is to analyse the influential content senders.

It is possible to categorise influencers / KOLs according to different KPIs (indicators). Here, two angles are retained:

Some graphs are available in interactive version here. You can browse through them and find KOLs that match your criteria!

First of all, it should be noted that the analysis of mentions allows us to highlight the opinion leaders solicited.

To do this, we sub-sampled the dataset on the English community. Here is the stakeholder mapping we obtained. 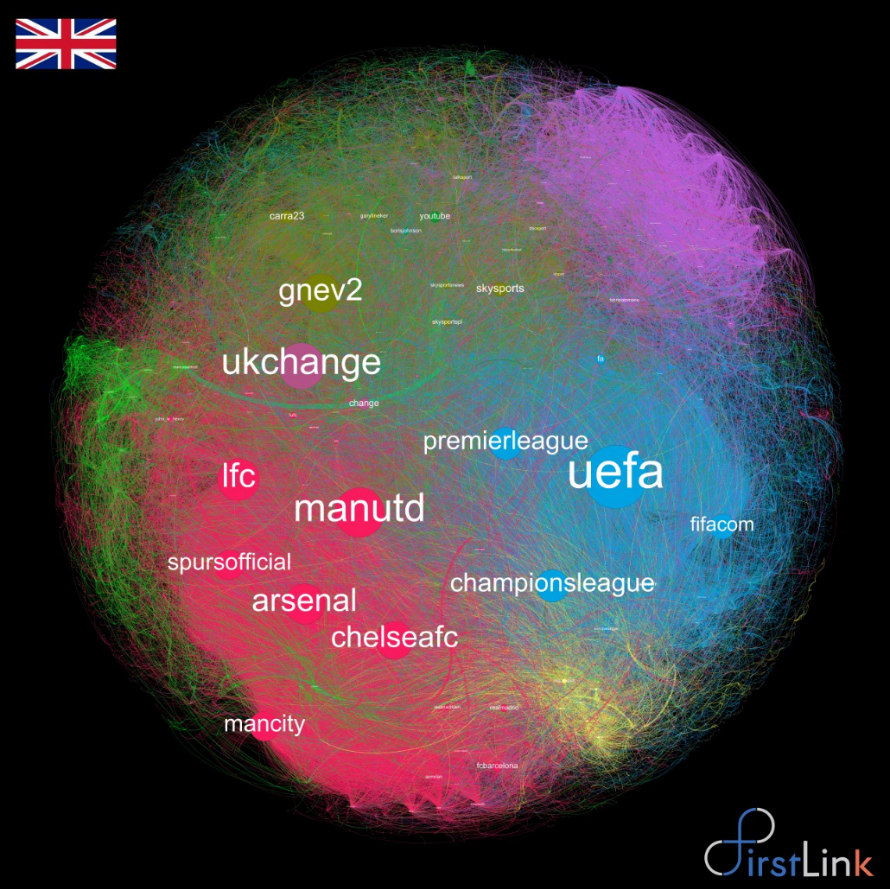 The first community therefore represents clubs and institutions (🔴 🔵 🟡): as the subject of the controversy concerns them, their majority presence is logical. It remains interesting to know which clubs are the most mentioned:

Focusing on the ‘media’ communities, we can see that the presence of English sports media such as Skysport on Twitter is carried by former players now consultants:

As far as specialised information relays are concerned, this community is carried by the international accounts:

If there are any stakeholders in the world of football that fans have been waiting to hear from, it is the players! In our list of mentions, we have to distinguish two types of players:

We must therefore distinguish between two types of players:

The players who spoke out and caused a reaction:

Players whose speaking out was expected:

The latest mapping’s communities show that English supporters were expecting a political response:

If you look at the same dataset, but with the angle of engagement (RTs and likes), the KOLs vary. And this is logical! Here, we are taking a more qualitative approach: we are analysing the stakeholders whose voice is supported.

Here is a graph showing the Top Users according to two parameters: RT and Likes.

To open this visualisation in a new tab you can click here.

This graph represents 3 variables : the number of publications on the y-axis (count), the volume of engagement on the x-axis and size (RT or likes) and the ratio between the two for the colour (Ratio RT or Ratio Likes).

It allows us to determine the leaders of engagement on the English Twitter Foot:

Now let’s look at the European level to conclude this analysis and to answer the initial question (who are the football KOLs in Europe). Here is the engagement graph on my complete dataset :

When we look at the cumulative engagement:

If we focus on the engagement ratio per publication:

Media that specialise in coverage of a particular club also generate a huge commitment in Europe : utdreport & theMadridZone

Finally, if we look at this datavisualisation by highlighting the language used by users, we can see that English content is by far the most engaging. However, the French news relay accounts manage to generate very strong engagement. For Spain, the El Chiringuito TV and 2010MisterChip are the most influential

If you have any questions or if you want to analyse the data of a subject ?